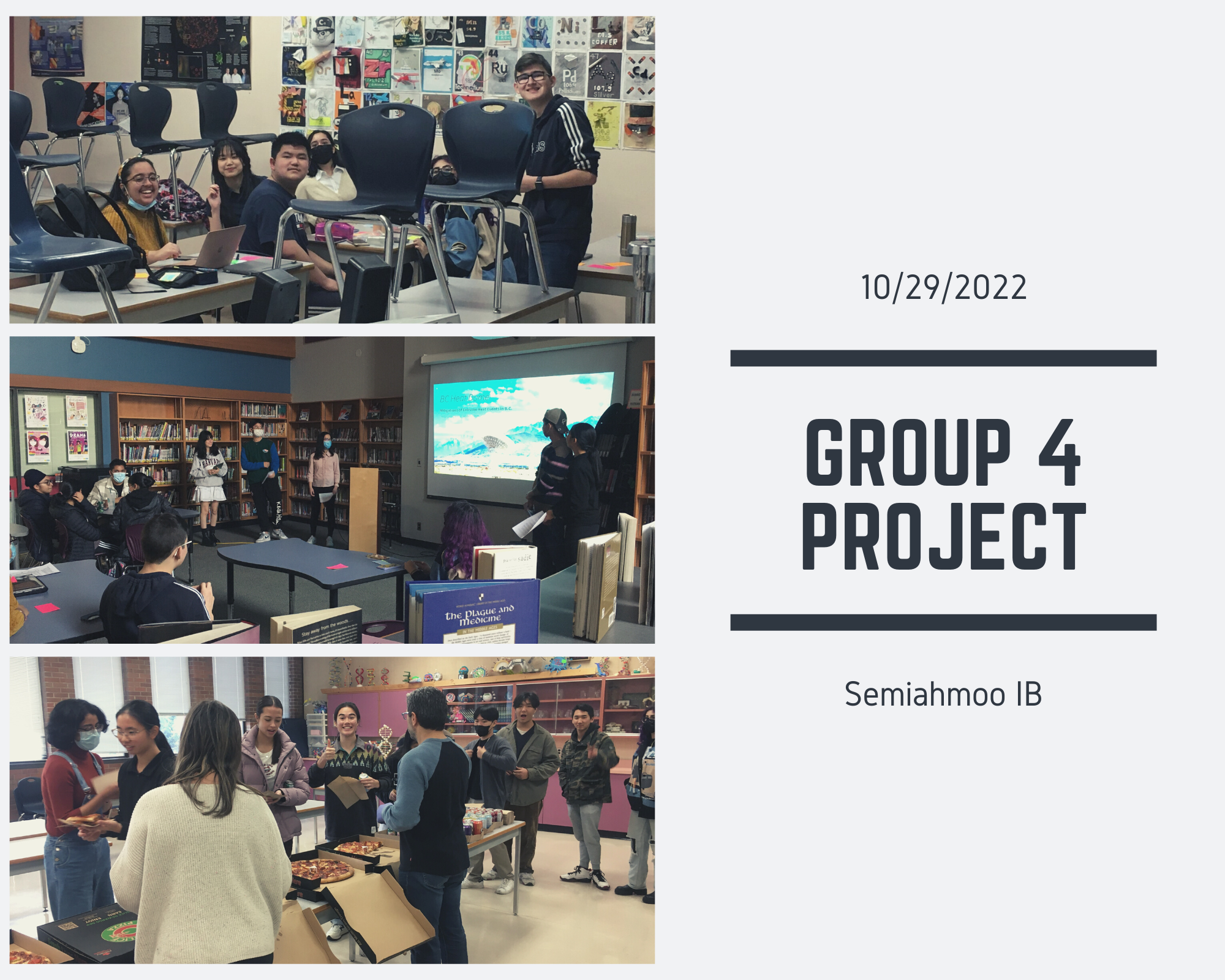 Seeing students gather at school on a Saturday morning is surely an uncommon sight, but the IB science students gathered this past weekend to complete the Group IV project. For a few weeks, students investigated pertinent natural disasters around the world like Hurricane Ian, the BC Heat Dome, Jigawa floods, and many more. On Saturday, they presented in groups on their various subjects, outlining their own innovative solutions to these disasters, followed up by engaging discussions with classmates. For many, however, the most memorable part of the day was enjoying slices of pizza and drinks at lunchtime with friends. Though the early wake-up may not have been a crowd favorite, the Group IV project was an experience enjoyed by all who attended. 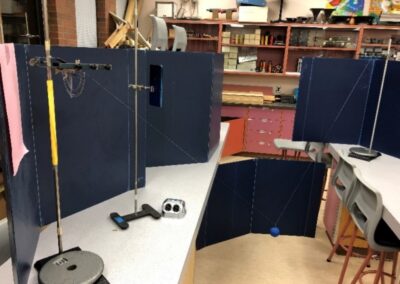 Twelve pages, several thousand words, and countless figures—the Physics Internal Assessment was an individually researched investigation we Physics students had been anticipating since the beginning of IB.

We began by marking previous IA’s; good, bad, we laughed at and praised them all, but the feeling that we would be the ones assessed soon loomed over. Breaking down the assessment criteria, we propelled ourselves into absorbing the good qualities of an investigative report and learned to recognize what to avoid. Ideas started blooming among our classmates—laser diffraction, coupled pendulums, wind tunnels—but that’s all they were: ideas on paper. We found ourselves at the helm of a dozen possibilities, with an inexhaustible list of available lab equipment; we set off to design our own experiments.

Our initial ideas were often not our last. This was something we had to learn the hard way. Hoping to have a perfect plan from the start, many of us became flustered when our first, second, and even our third ideas were never able to escape our paper. One at a time, we lined up in front of Mr. Halabi’s desk to ask about the feasibility and the background of our concepts. We wanted someone to guide us through every step, holding our hand through the investigative process. But no matter the questions we thought of, we did not immediately receive answers. Instead, we received constant feedback, support, and patience, with nudges in the right directions. Ultimately, this allowed us to independently discover the research, investigative, and design process.

With help from each other, we as peers leapt from the theoretical towards the practical. Having designed experimental setups, our next task was to conduct data collection. Whether it was morning, during class, or after school, the physics classroom was a hive of experimentation. Motion sensors, oscillating masses, and launched projectiles filled every corner of the room. For some of us, this process was quick; for others, each day was a new design, an improved setup. We became pillars of support for each other, helping one another collect data and troubleshoot experimental procedures.

Setup pictures (with iconic blue class dividers) flooded our desktops and miscellaneous numbers filled our excel sheet, incoherent to everyone but ourselves. With our data in front of us, we now had to put it into words. All through IB Physics 11 and 12, we dreaded long lab reports, which involved arduously formatting equations and meticulously labeling figures. But because of this constant practice, catching details became second nature to us and data analysis was no longer a puzzle. We were more prepared than we had thought.

Researching background information and filling in the gaps in our knowledge with previous research, we worked to predict a theoretical relationship between the variables we had chosen. Otherwise, we worked on being concise, keeping the report under a 12-page limit. Through consistent practice in past investigations, we were able to clearly present our experiments and write with a logical flow to our analysis. With data in hand to support our conclusions, we were led full circle to the research questions we had posed at the beginning of our investigations, arriving with this time with a definite answer.

“It’ll prepare you for university”, “It looks good on applications”, “You’ll learn so many physics concepts” were things we heard frequently about the IA. What we were not told about, however, was the stress of whether your perfectly logical math model would work in the physical world, the quadratic graphs that were supposed to show linear functions, and the uncertainty and self doubt you felt at every step of the process. We did not learn how to create perfect setups nor how to derive infallible math models. We expected ourselves to be perfect, but instead we made mistakes at every turn. But after every failed concept, we became a little smarter, a little more determined, and a lot more courageous. At the end, our evidence of growth is not the 12-page paper on sound waves or projectile motion, but it is our ability to face failure with open arms.

Congratulations to IB Physics 2022 on completing the IA! 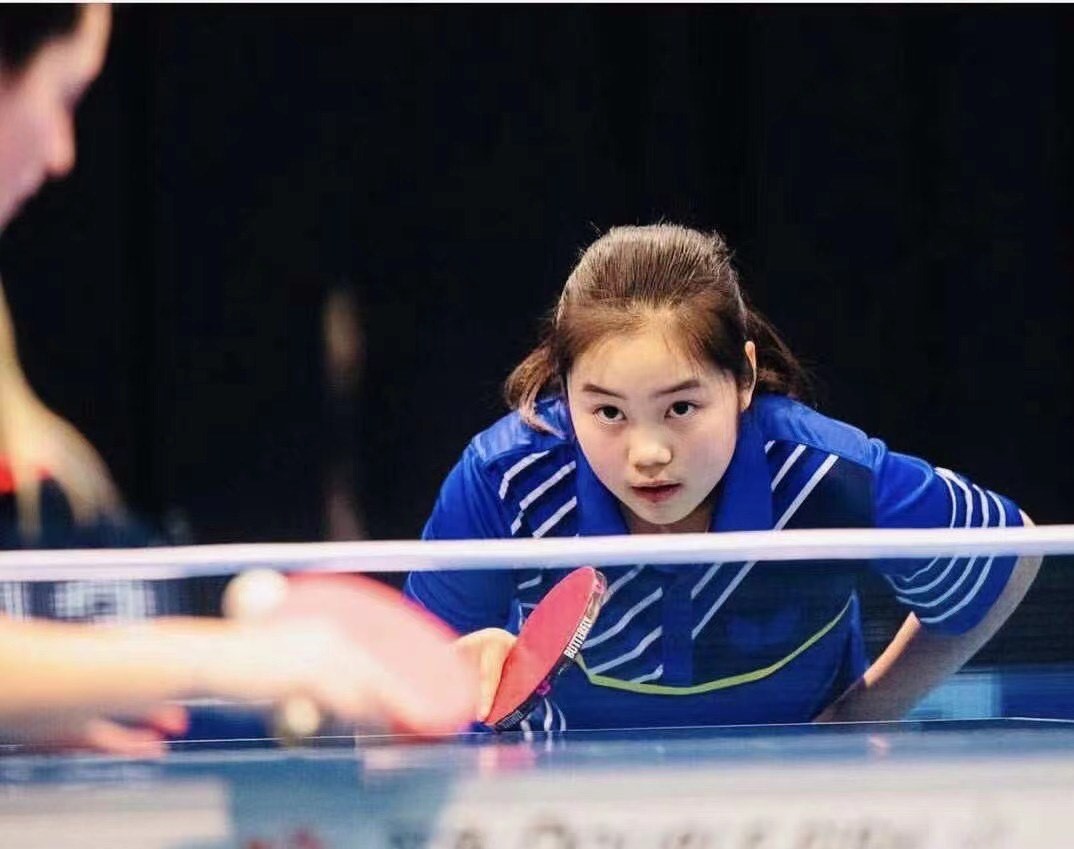 From September 30th to October 3rd, Semiahmoo grade 11 Student Fiona Nie battled it out with top Table Tennis talent from across Canada in the National Championships held in Laval, Quebec. Fiona fought hard, and after a series of close matches secured the gold medal in the girls under 19 category. Fiona was also awarded the Fair Play Award for her upstanding sportsmanship. From the website of Table Tennis Canada,

The Fair Play Award, or formally known as Silver Bat Fair Play award, goes to British Columbia’s Fiona Nie. The award was chosen by the Officials, Coaches and Volunteers at the 2021 Canadian Championships. Fiona received the award as in a really tough game (3×2), in a decisive ball where the umpire gave the point to Fiona, she bravely argued with the umpire that the point was the opponent. 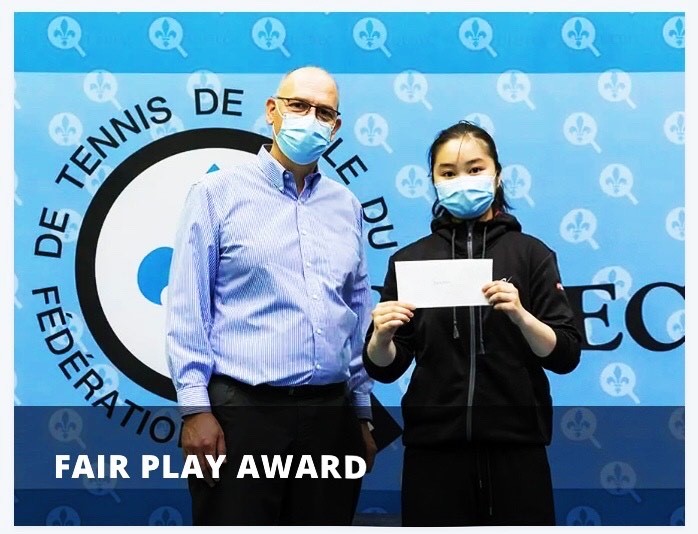 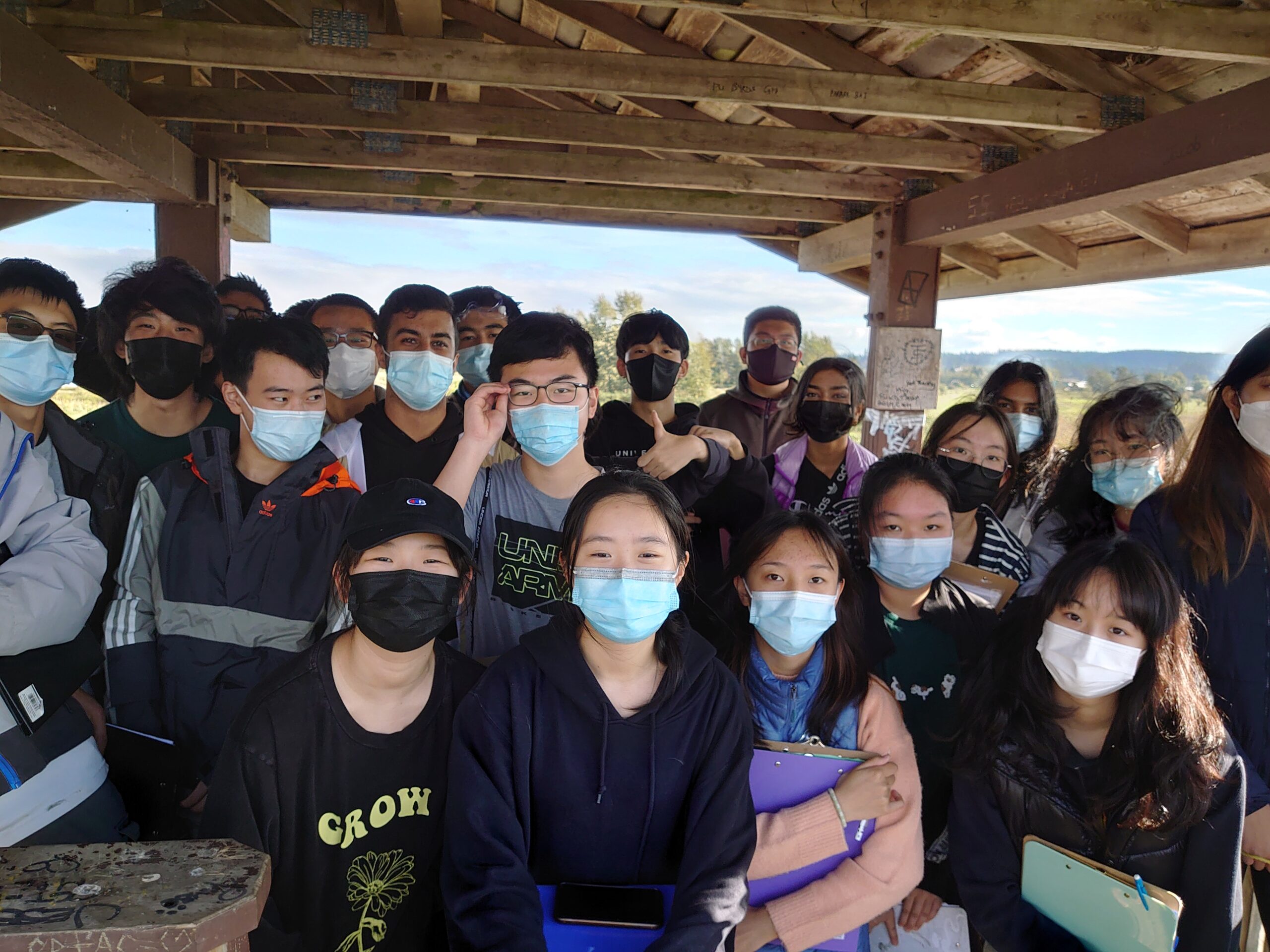 By Emily Chen and William Wang

The IB Geography SL and HL classes of 2022 embarked on their journey towards the “Lungs of the Lower Mainland” this month. 33 years ago, the Burns Bog Conservation Society was formed to protecting the valuable peatland and unique flora and fauna that thrive there. Formed over thousands of years, the self-sustaining bog is vulnerable to even the slightest changes in water table levels, acidity, and drainage. We, the IB Geo students, trekked this unique ecosystem to study how its plants manage to thrive under such harsh conditions and requirements. Year after year, students observe Burns Bog, Watershed Park, and the Serpentine Wildlife Management Area, to extrapolate data and draw conclusions. This year was no different, but no less interesting to say the least.

Q: What do you think was the most important aspect of the field study?

William: I think that the most important aspect of the field study is what we take away from it. It’s after trips like these that we truly appreciate what nature has to offer and how devastating human infrastructure, such as highways or other buildings, looks in stark contrast to the natural beauty of these reserves. It’s difficult to understand nature through a screen, and while technology has allowed public perception and understanding of communal issues to be brought to light, it is mainly the hands-on experience that allows for the true appreciation of nature to happen.

Q: How does it feel to go on a field study?

Emily: We also went on geography trips last year but this one felt like it contained a lot more pressure because it was linked to our internal assessment. The entire trip I was very focused on getting photographs, to get my data since I knew I only had one shot to get it right. But overall, I thought it was a very rewarding and educational experience as there is a lot to explore in my findings.

Q: What was the most surprising thing?

W: The vast difference in vegetation at all three sites. It felt like I was in three different worlds within ten minutes’ drive of one another. Though Mr. Mleziva emphasized during the pre-field study what to look out for and take notice of, it took seeing the vast diversity of flora present at each site to understand the reality of the difference.

Burns Bog, Watershed Park, and the Serpentine Wildlife Management Area will continue to be sites of interest for our IB Geography classes and for tourists in the foreseeable future. These field studies enlighten students and open their eyes to a world hidden only a 10-minute drive from our community. However, sites such as Burns Bog, which play a vital role in our macro-ecosystem need to be preserved, to be safeguarded against farming, peat harvesting, paving highways – all of which have harmed the bog in the past. These areas are also a large carbon and methane sink. Maintaining the bog and surrounding habitat helps reduce greenhouse gas emissions while preserving the natural world of diverse animals and plants so important to the history and ongoing natural appeal of the area. Finally, a tip for future IB Geography students: look out and stay alert during class. You won’t regret it, and your IB Geo Field Study experience will be unforgettable.

“What? That’s so crazy!” was a phrase that I had uttered far too often at the IB World Student Conference (IBWSC) in Rotterdam.

For a week in July, I experienced non-stop discovery. Along with over 70 other IB students, I was put into a Global Action Team (GAT) to explore the theme of “Vital Cities, Vital Citizens”, or in other words, discuss what problems the world will be facing over the next century. Each day was filled with both academic and recreational activity. We were given the opportunity to talk to local Rotterdam citizens as part of a scavenger hunt, see the oddly-shaped Cube Houses, and listen to a lecture by a professor from Erasmus University.

However, like with many other things, the best part about the IBWSC was the people. At The Student Hotel, I became exceptionally close with the girls on my floor, who were from countries all over the world, including Kenya, Turkey, Mexico, the USA, and China. What I saw on Canadian news networks became real to me, as I heard stories about Chinese schools bribing government officials to allow students to use certain programs. My GAT group was just as interesting, as I realized that the FIFA World Cup had given Russians from the countryside a much-appreciated chance to celebrate and welcome tourists.

News reports don’t do their citizens justice. It was eye-opening to listen to people that had actually lived through news events. Coming back from the IBWSC, I became so much more aware of the personal impacts of global issues, such as natural disasters, political instability, and corruption. IBWSC wasn’t so much about being an IB student – it was much more about being a global citizen.